Many of Liszt’s works have complex, protracted geneses. Rather than chisel away in furious, even obsessive, self-criticism like Brahms, working his way toward a final, perfected version – there are exceptions – Liszt tended to move on, sometimes furnishing several, competing versions of an ‘original’ work. In addition, there are, of course, arrangements, transcriptions, paraphrases, and much in between, often again in more than one version. Not all of Liszt’s works – nor Busoni’s, following closely in the footsteps of his great pianist-composer predecessor – are works in progress. Even when not, though, we can sense a restless tendency, something moreover of an improvisatory, experimental beginning, with or without closure. 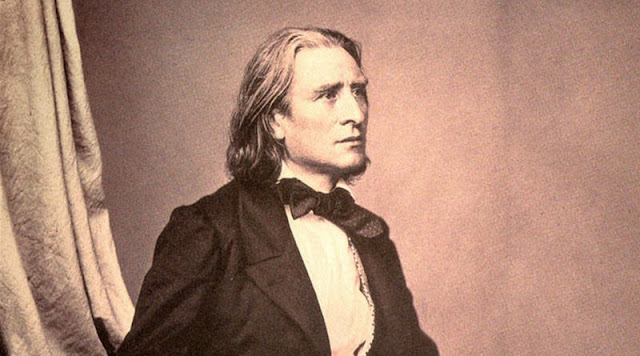 The origins and ‘poetic idea’ of Liszt’s Weinen, Klagen, Sorgen, Zagen Variations are autobiographical. Liszt’s daughter Blandine had died on 11 September 1862; at the end of that month, his son-in-law Émile Ollivier travelled from Saint-Tropez to Rome to inform Liszt of her last days. In response, Liszt penned a series of 48 variations on the ground bass from the opening movement of Bach’s 1714 cantata Weinen, Klagen, Sorgen, Zagen BWV 12, also familiar from Bach’s own recycling in the ‘Crucifixus’ of the Mass in B minor. A chromatically descending line furnishes Liszt, as it had Bach, with plenty of scope for what Schoenberg would christen ‘developing variation’.

However, Liszt, following and extending Beethoven’s example as composer of variations, begins in a different key, D flat major. Typically crashing chords make their way to the tonic, F minor, long a key of mourning for Liszt, through the offices of an anguish that borders upon mental collapse. Sovereign command of his instrument enables Liszt to coax, to compel, even to coerce the piano to join him, Bach and the listener in the weeping, lamenting, sorrowing and fearing that combine in mourning. First introspective, relatively strict in its contrapuntal homage to Bach, then broadening out until it brings the very idea of variation under Mephistophelian attack, the work’s progress might be understood to mirror that of Liszt confronting the death of a second child – his son, Daniel, had died less than three years earlier. Several years of a process yet to be concluded are condensed into a grand sweep that is musico-dramatic in an almost Wagnerian sense.

Arioso tendencies certainly inform the spirit and progress of the 48 variations, negating the letter and yet ultimately reinstating the spirit of Bach’s passacaglia. Telescoping Bach’s plan in his cantata as a whole, Liszt reaches the Lutheran chorale in F major, ‘Was Gott tut, das ist wohlgetan’ (What God does, that is well done). Or is it? Such affirmation attempts to proffer retrospective meaning on the search, the struggle, the soul bearing of the work as a whole. The Abbé Liszt nods assent as he must, even in grief. He adds the words of the hymn above: plain and unanswerable. Chromatic daemons nonetheless work to undermine it before the close; if their success is not unambiguous, the major mode of the ending is scarcely affirmative, the insistence upon the final tonic chord weary in alleged triumph.

Tears at the Heart of Things

Mourning as unending process is again the subject of the next piece, written in 1872, later published as part of the third book (of 1883) of the Années de pèlerinage: ‘En Priamus. Sunt hic etiam sua praemia laudi, sunt lacrimae rerum et mentem mortalia tangunt’. Even for a poem, Virgil’s Aeneid, hardly lacking in scholarly, artistic, all manner of attention, these words have been considered exhaustively. Having come upon a Carthaginian temple dedicated to Juno, its walls decorated with scenes from the Trojan War that had turned his and his men’s lives upside down as refugees, Aeneas exclaims to (the memory of) his father, Priam: ‘there are tears at the heart of things’ (according to Seamus Heaney’s translation). A 19th-century artist as pluralistic in national and cosmopolitan identity and thus as homeless as any – in a state of permanent pèlerinage – Liszt knew this well. His subtitle renders the general claim particular: ‘en mode hongrois’ (in the Hungarian style).

This is no divertissement, though ‘gypsy’ or ‘Magyar’ – for Liszt, the two were more readily interchangeable than for his more ethnomusicologically minded successors, such as Bartók.  As in the 1849 ‘Funérailles’ from his Harmonies poétiques et réligieuses, an angry elegy for the Hungarian Revolution crushed that year by the Habsburgs, Liszt, like Aeneas, remembers his comrades. This piece shares the growling low register of that earlier work, the obsession with unstable, even brutal augmented seconds; it shares its rhythmic and harmonic defiance too, its refusal to be cowed. Themes, intervals, progressions, gestures which one might hear as anticipatory modernist in the throes of, say, the Piano Sonata in B minor are now found in isolated, even distilled form, the essence of an almost responsorial music. For this is a work of Liszt’s old age, a gateway to a world of further elegies and threnodies, of embittered near atonality: seraphic in transcendence, yet also, far more clearly than the Weinen, Klagen, Sorgen, Zagen Variations, dejected in temporal contemplation. Liszt’s utterances remain Janus-faced, similarly refined glances to the world of his first book of pilgrimages, reminding us of a Romantic world that he and his people – real or imaginary – cannot, will not, relinquish.

Another day ‘full of tears’ is the Day of Judgement: certainly, according to the Lacrimosa of the Requiem Mass. No setting is more celebrated than Mozart’s, not only on account of the manuscript breaking off, with almost unbearable Romantic poignancy, just eight bars in, the life of our misunderstood, suffering (allegedly) genius cruelly cut short, yet still more so on account of its musical quality. Franz Xaver Süssmayr’s completion has never seriously been challenged, the ‘scraps of paper’ given him by Mozart’s widow, Constanze, having clearly offered expert guidance. The D minor pathos, perfectly judged harmonically and rhythmically – rocking metre and rests of equal importance here – could hardly have failed to appeal to Liszt. He chose this and the Confutatis to transcribe for piano, his work here respectful, restrained, in no sense a paraphrase such as the Evocation à la Chapelle Sixtine – based on Mozart’s Ave verum corpus and Allegri’s Miserere – penned on the same 1860s visit to Rome. It is not difficult to imagine him warming to the legend that this movement was sung at Mozart’s death bed; hearing or playing this 19th-century homage, it is not difficult for us to warm to that legend too.

More neglected still as a composer than Liszt, Busoni would have understood only too well Liszt’s pessimism concerning performance of his later works. Liszt had gone even so far as to forbid, at least strongly to counsel against, performance, fearing it would harm his pupils’ careers and elicit further hostile criticism. At any rate, Liszt proved a crucial forerunner, example and inspiration to Busoni throughout his life and career – as, of course, did Bach. Busoni suffered personally and vicariously for his Lisztian advocacy, a clueless London critic for The Times lamenting of a February 1913 visit to the Bechstein (now Wigmore) Hall, which included the Weinen, Klagen, Sorgen, Zagen Variations:

There are many people who regret that a great pianist whom they otherwise want to hear should spend the afternoon playing Liszt, and the regret is intelligible enough. But if a whole programme of Liszt is to the played at all, probably everyone would agree that there is no pianist so able to hold the attention through it and give pleasure at the same time.

In grudging concession, the anonymous critic owned that:

[Many] must have realized in listening merely to the Variations on Bach’s theme […] that the most advanced technique discovered, one may say, by Liszt and pushed to the point to which Signor Busoni has brought it, is capable of making the pianoforte express new ideas and a new kind of beauty (with the corollary that there may be new kinds of vulgarity).

Onwards and upwards, then, to Busoni’s ultimate reckoning with Bach, via Liszt’s example as transcriber, composer, tireless advocate: the Fantasia contrappuntistica, its D minor tonality provided by Bach, though it follows nicely here from Liszt’s Mozart transcription. The Fantasia grew out of Busoni’s work on a critical edition of Die Kunst der Fuge. His friend, Bernard Ziehn, composer and music theorist, persuaded him that the trick to completing Bach’s final, quadruple fugue was to understand that the missing subject was in fact the principal theme to the work as a whole, offering obvious cyclical unity. Busoni set to work, initially on a ‘Grosse Fuge’ – ‘it will be like something between C. Franck and the “Hammerklavier” Sonata, but with an individual nuance’ – which was almost immediately expanded into the work we know today. In homage to Bach, the master of the organ chorale prelude, the work opens with variations on ‘Allein Gott in der Höh sei Her’ – essentially an expansion and revision of the third of Busoni’s piano elegies.

Three fugues arise from its ashes, by way of a lovely three-part invention, ‘intimamente e indugiando’. Drawing upon scholarship and imagination, transcription and composition, something both old and new is created, tracing Bach’s lines to what Busoni considered to be their provisional – there could surely never be an ultimate – conclusion. And so, an intermezzo, haunted, like much of the rest of the score by the monogram, ‘B–A–C–H’, has its own material transmuted into a series of three variations, cadenza and a further transition – in a strong sense, the work is entirely transition – into the fourth fugue. It triumphantly, yet not without chromatic dissent, reinstates D minor, furious in the enormity of its necessarily unsuccessful attempt to ‘complete’ Bach. Reimagination of the opening chorale – comparison and contrast with Liszt are equally valid – and a concluding, climactic stretta prepare a close as climactic and, in retrospect, if not in the moment, as open-ended as we might hope.

It is on the grandest scale, if not of the Piano Concerto’s duration (roughly 70 minutes), then aspiring to it and conceived as a magnum opus of similar vein. An extraordinary Berlin concert of 1912 offered both, with the Fantasia in an orchestration by Frederick Stock and the exquisite orchestral miniature – at least by comparison – Berceuse élégiaque in between. We might also think of the composer’s – ironically, perhaps necessarily – incomplete opera as summa: Doktor Faust. Ideas, expressed conceptually and emotionally, of transcription and variation remain public and private. Let us grant Busoni the final say:

Every notation is itself the transcription of an abstract idea. The instant the pen seizes it, the idea loses its original form. The very intention to write down the idea compels a choice of measure and key. [...] Again the performance of a work is also a transcription. Whatever liberties it may take it can never annihilate the original. [...] So the arrangement is not good, because it varies the original; and the variation is good, although it “arranges” the original.

(This essay was originally published as a programme note for a 2019 Salzburg Festival recital by Igor Levit.)
Posted by Mark Berry at 6:27 pm