Openness takes many forms, musical and otherwise, and often lies in the eye or ear of the beholder or listener, not to mention particular decisions taken by performers. So too do its dialectical opposites. The music of both Berio and Mahler offers, as we shall hear, cases in point.

Berio’s Voci, for viola and two instrumental groups, is subtitled ‘Folk Songs II’, immediately suggesting lineage with Berio’s 1964 cycle of Folk Songs, written for Cathy Berberian. There, folk and other songs are arranged, first for small ensemble, later, in 1973, for large orchestra, opening with viola, encouraged to play ‘like a wistful country dance fiddler’. Voci, continuing the practice of ‘return’ at roughly ten-year intervals, was composed in 1984, for the Sicilian viola player Aldo Bennici, who provided Berio with the work’s ‘original’ musical material: ‘songs of work and love, lullabies and “street cries” from different parts of Sicily’.

This time, however, Berio hoped, as he put it, ‘to contribute to the enhancement of a more profound interest in the Sicilian folklore which, along with that of Sardinia, is certainly the richest, most complex and incandescent of our Mediterranean culture’. Echoing and extending the ideas of friends such as Umberto Eco and Italo Calvino, Berio sought an ‘act of transcription (like that of translation)’, that would ‘imply three different conditions’:

The identification of the composer with the original musical text, the turning of the text into a pretext for analytical experimentation and, finally, the overpowering of the text, its deconstruction and its philological “abuse”. I believe that an ideal situation occurs only when the three conditions come to blend and co-exist. Only then may transcription become a truly creative, constructive act.


Not that this is all ‘meta’ in quality. The sounds, sights, even the smells and spices of Sicily and the Mediterranean world surrounding it, come before our ears. Physicality and performance are intimately intertwined. Bells and violas – the latter both as soloist and in the second group – inaugurate a typical musico-theatrical display, the opening solo line suggesting both ‘folk music’ and our aestheticized ‘concert’ versions thereof – Berio rarely deals in the either/or. If we may speak at all of what Voci ‘is’, though, it is no showpiece. It seems rather to permit folk material to go where it will, for us as listeners to hear it as we will – or as it wills. ‘Traditional’ accompaniments come and go, sometimes explicit, sometimes suggested, ever ‘transcribed’.

This is emphatically not the world of Folk Songs in its first incarnation. The viola here is the singer, but more than that: even, at a pinch, the singer-songwriter. Songs, cries, colours, memories, and anticipations thereof, are material for composition, as Diabelli’s ‘cobbler’s patch’ waltz is for Beethoven’s set of variations. If Berio and his viola alter ego seem to respect the mood of the ‘originals’ more than the haughtily contemptuous Beethoven, their fidelity nonetheless lies in infidelity: like a Liszt at the piano or a director on stage. In the manner of Berio’s series of Chemins for solo instrument and orchestra, where, to cite the composer, ‘I quote, translate, expand and transcribe my Sequenzas for solo instrument’, those Chemins also proving the Sequenzas’ best analyses, material is further analysed, developed, played with, elaborated. We could even say that Berio’s Folk Songs, as well as Sicily’s folksongs are here, in the composer’s fullest sense, transcribed. ‘Why this insistence on elaborating and transforming again the same material?’, Berio once asked, again with reference to his Chemins, fellow-travellers on the way, as it were:

It is, maybe, a tribute to the belief that a thing done is never finished. Even the “completed” work is the ritual and the commentary of something which preceded it, of something which will follow it, as a question that does not provoke an answer but a commentary, and another question.

There is existing music to be found in Mahler’s First Symphony too; there is also music that might be imagined to have existed previously yet has actually been ‘fully’ composed. It is no transcription in the usual sense, but in the present context, one of the many ways in which we might hear it might involve the elaboration and transformation of which Berio speaks – and, more to the point, which he puts into practice. Mahler’s music was certainly of great interest to the Italian composer, whether in his 1987 orchestration of Six Early Songs or the underlay to the third movement of Sinfonia provided by the Scherzo to Mahler’s Second Symphony. Moreover, just as Sicily is only partly – very partially – ‘Italian’, far better understood as Mediterranean, Mahler’s mitteleuropäisch material and musical world likewise confound easy categorization of nationality, creed, or anything else. Both composers, both works, are synthetic and, yes, open in their approach to original material and to its development.

Bearing that lightly in mind, we might hear the opening of the first movement both with hindsight and without, aware of the complexity of the relationship between artworks and history, as fruitful in performance as in analysis. To quote the doyen of Mahler scholars, Henry-Louis de La Grange, ‘few composers have succeeded in evoking so poetically and with such simple means the romantic magic of nature’s awakening, its birdsong, legendary hunting horns and distant fanfares’. This music, marked ‘slow, dragging’ and ‘like a sound of Nature’ (Naturlaut), seems perhaps less to drag, more to stand in a state of suspended animation. It will return, as if an adult, even Freudian, memory of Mahler’s eternal childhood, a memory of eternal magic and Wunderhorn Romanticism, both of which, in Berio’s sense, are ‘transcribed’ here. Mahler’s own early cantata, Das klagende Lied (1878–80, though unperformed until 1901, and then in substantially revised form), as well as other early compositions, such as the Lieder eines fahrenden Gesellen (1883–5) seem both to pave the way and to find fulfilment. 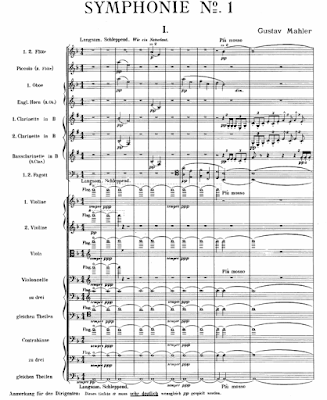 This introduction moves, like Don Giovanni or Beethoven’s Ninth Symphony, from D minor to D major, from glistening harmonics that seem already to steal from Schoenberg’s Gurrelieder music of the future, to rambunctious ‘transcription’ of the second of Mahler’s Lieder eines fahrenden Gesellen. Yet, unlike those Mozart and Beethoven works, models for a Romantic journey from darkness to light, Mahler’s Naturlaut in a forest-world of trees and birds – listen for the clarinet cuckoo – is prior to, or beyond, our experience: a Caspar David Friedrich landscape, without its solitary human hero. Harmonics were not, however, part of Mahler’s initial conception, but rather a revision, such as he always made, in the light of performance: in this case, following the 1889 Budapest premiere, at which, he wrote, the music had ‘sounded far too substantial for the shimmering and glimmering of the air I had in mind’. Alienation from nature required, in the first place, alienation from society – and, of course, an astounding technical command of harmony, orchestral colour and blend, pulse (or lack thereof), and space, so that fanfares from without can register without truly disturbing.

The first movement ‘proper’, at least to conventional sonata-form understanding, is perhaps surprisingly focussed upon this single and singular material; as Mozart before him, Mahler knows very well when something approaching monothematicism will counter trademark melodic profusion. We are now in the human world, that human presence called forth, in Julian Johnson’s words, ‘literally […] from the absence defined by the introduction’. Contrast between this block – in an almost Brucknerian sense – of material and that of the introduction is more the driving force of this movement than ‘traditional’ symphonism, if indeed such a thing still existed. In its initial five-movement form – a serenading ‘Blumine’ second movement, rediscovered by Donald Mitchell in 1966, was eventually discarded in the light of harsh criticism – Mahler spoke of a ‘symphonic poem’ and, in cumbersome nomenclature of Wagnerian proportions, a ‘tone poem in form of a symphony’. Such apparent hybrids were very much the province of Wagner’s ‘New German’ confrères Berlioz and Liszt too, yet very much opposed by self-appointed guardians of the Classical flame such as Eduard Hanslick (allegedly on behalf of Brahms). Perhaps it was as well, then, that the Symphony did not reach Vienna until 1900, four years after initial conversion into four movements.

The A major second movement is a Ländler, never quite as expected, the Mahlerian subject, whoever that may be, alienated already, though we know not yet – shall we ever? – from what. Material from his early song ‘Hans und Grethe’, later orchestrated by Berio, is ‘transcribed’, glorying in rusticity and/or its parody. As traditional for a scherzo, whether in duple, triple (as here) or any other metre, the Trio relaxes; what Mahler would instinctively have applied to Mozart or Beethoven is here written in and thus slightly exaggerated: ‘recht gemächlich’ (rather leisurely). We often, rightly, tend to think of Bruckner and Mahler as mutually opposed, not least given their radically different approaches to orchestration. Here, once again, however, there is a sign of ‘Austrian’ kinship, extending back, at least as far as Schubert.

A ghostly D minor version of the folksong ‘Bruder Martin’ (perhaps more widely known as ‘Frère Jacques’) takes the woodland wonder of Mendelssohn’s Ein Sommernachtstraum funeral march to disconcerting, downright bizarre extremes. Solo double bass, muted, straining at the top of its register, initiates a canonic processional, first involving other bass instruments (bassoon, cellos and tuba), supplemented by a growing throng, until rudely interrupted by a Bohemian klezmer band to rival anything ‘transcribed’ by Berio. Mahler’s craft is anything but vulgar; this is knowing depiction, a contest of material and of worlds, complicated by another unprepared move to G major, now for the Schubertian linden tree of another Gesellen song. The deathly marionettes, the bitter irony, the clashes and vistas of later Mahler symphonies: all are here in more than embryo in this astonishing movement.

The Finale explodes onto the scene, not unlike the Symphony as a whole. Most of the material with which Mahler will construct the battle to come is heard in quick succession, as if newly emboldened characters drawn from the observers of that march (a snatch from absent ‘Blumine’ included). D major is here to triumph, but not quite yet. A notably ‘feminine’, even Tchaikovsky-like second theme in D flat major, ‘sehr gesangvoll’ (very songful), has a ‘mystical stillness’ to its lengthy violin cantilena that, as De La Grange points out, ‘is also intensely Mahlerian’. Distance from the opening material is retrospectively sanctioned by exclusion from the development until its close, heralding a recapitulation that has mystified many, some even decrying empty repetition. Listen, however, to this violent, ultimately humanistic drama – having left behind the first movement introduction forever – with the ‘New German School’ in mind, and you will hear an unabashed symphonic drama, albeit not as the world yet knew it.

(This essay was first published in a 2019 Salzburg Festival programme for performances by Antoine Tamestit, the ORF RSO Vienna, and Jonathan Nott.)
Posted by Mark Berry at 1:26 pm