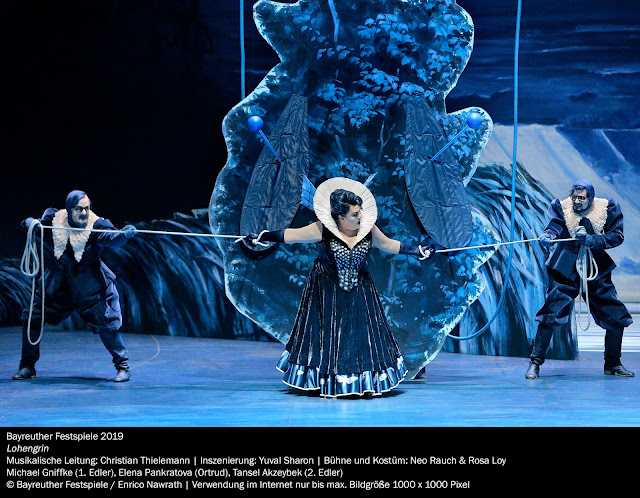 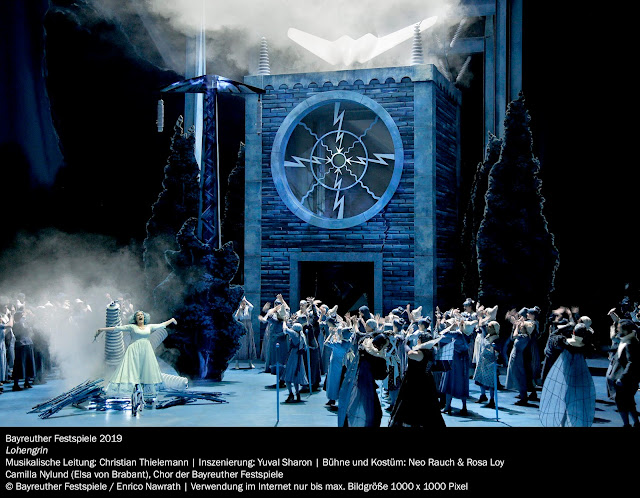 The origins of this production of Lohengrin, first seen at last year’s Bayreuth Festival, are interesting and unusual. Alvis Hermanis, an avowed ‘conservative, and proud of it’ – for which, as usual nowadays, we should read something considerably more extreme – had been due to direct the new production. Hermanis withdrew in 2016, to little sadness from the rest of the world, yet nevertheless bequeathing the Festival a serious headache. By that time, work on the designs by the New Leipzig School artists, Neo Rauch and Rosa Loy, was already far advanced. Yuval Sharon, as incoming director, was presented with a greater challenge than simply directing a new production of Lohengrin (and, incidentally or otherwise, being the first American director to work at Bayreuth). He had to formulate and put into practice his own production, using designs intended for another production.

Watching the dress rehearsal last year – I did not see a public performance, and thus did not write about it – I saw a productive tension, an immanent critique, which fascinated me: broadly, and thus misleadingly, politics pitted against fairy-tale, not unlike the work itself. It was doubtless in some respects still a work-in-progress: every production, every performance is. It made me think, though, and I was greatly looking forward to seeing it again this year, to seeing how it had progressed, hoping that the cracks, the fissures, the contradictions would have provocatively deepened. Alas, that did not seem to have been the case; if anything, the production seemed to have reconciled itself to the designs. Perhaps it is too much to ask of a staging that the two can continue to struggle like that, especially when performers have their own imperatives. I genuinely do not know and it may have been entirely my own fault, but I must confess that, to my great sadness, I missed a good deal of what I saw and gleaned last year. 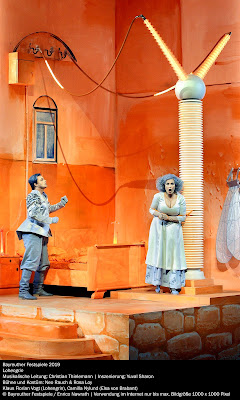 At first, this was not apparent. Indeed, the first act engenders considerable expectancy (at least on my part!) It comes across, or at least did to me, in painterly fashion: a Romantic fairy-tale world, slightly frozen – so blue, so very blue! – from which things can and must progress. It is, then, waiting for Lohengrin; as are we all. When he comes, he ignites the world. He brings electricity, literally as well as figuratively. Is this the beginning of the route from an early-modern Brabant to socialism, a short-circuit, as it were? If so, only fitfully – and that, this time, does not necessarily seem to be a deliberate undercutting. Instead, the critique seems to halt, even to vanish, in the second act, not helped at all by Christian Thielemann’s sometimes interminable scenic-route reveries. At times, other than marshalling of the forces onstage, little else comes across. There is more in the third act, though even that seems considerably less bold. Lohengrin tying Elsa up comes across more as pretty choreography than a deadly game of sado-masochism. And the hints at green politics, culminating in a bizarre, if intriguing green Gottfried, do not come across nearly as strongly as they might. Ortrud’s rightful oppositional status – what if she is right, seems to be the question – is likewise considerably less clear. It is a pity, since I remain convinced that there is potentially much to be admired here. Perhaps 2020 will sharpen things up. 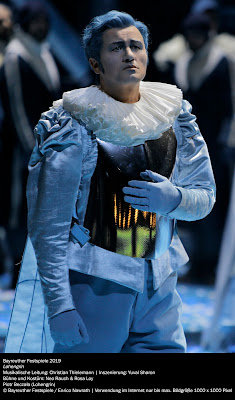 Thielemann’s conducting proved variable. Like the production, he was stronger in the first and third acts, although, as in his Tristan the night before, there was no doubting his extraordinary ability to have the superlative Bayreuth Festival Orchestra do whatever he asks of it. Speed, or otherwise, was not in itself the problem: indeed, speed is only a part, often a relatively unimportant part, of what we really mean by ‘tempo’. The listlessness and at times the self-regard we heard in the second act most certainly was. A little study of Wagner’s essay, Über das Dirigieren, might help. There were magical moments, magical passages, yet sometimes – only sometimes – they came at the expense of musico-dramatic momentum.

There was much to admire from the cast. A few vowels aside, Piotr Beczala’s Lohengrin approached the ideal. ‘Italianate’ might be a lazy way to describe his phrasing, but I hope it will be understood for what it is, in the very best sense. Not that it came at the expense of words, far from it. Beczala’s golden tone could be relished in and for itself, but that would have been to miss an acutely, astutely dramatic portrayal, one I should dearly love to hear again. Camilla Nylund’s Elsa had the occasional rocky moment in the first act, but hers was likewise an intelligent, committed, and beautifully sung performance. Tomasz Konieczny and Elena Pankratova offered similarly intelligent, highly musical portrayals of Telramund and Ortrud, although the latter’s diction occasionally left one having to fill in verbal gaps for oneself. Georg Zeppenfeld never, in my experience, disappoints; that is no reason to take singing such as that for King Henry for granted. Egils Silins’s Herald likewise compelled attention and admiration. So too, last but not least, did the outstanding performances of the Bayreuth Festival Chorus, vocal heft, stage versatility, and verbal comprehensibility all second to none.

Still a work-in-progress then? Doubtless. However, whatever work may remain to be done here – there is always work still to be done – we may give thanks that this was not an Alvis Hermanis production. Catastrophes such as his Vienna Parsifal and, perhaps still more, his Salzburg Liebe der Danae warn of what might have been.