To view the relationship between Italian and German music as the fundamental driving force of modern Western musical history would be a gross oversimplification. However, in Salzburg of all places, ‘the Rome of the North’, it is a temptation that might be forgiven. It was here, after all, not long after the original 1608 premiere, that Monteverdi’s L’Orfeo received its first performances outside Italy, at more or less the same time as the foundation stone was laid for the new Cathedral (in 1614). Salzburg’s crucial importance as a staging post for the northward progress of the Italian Baroque, architectural and musical, renders it an especially apt home for this concert, Johann Bernhard Fischer von Erlach’s Kollegienkirche, built between 1694 and 1707, in turn an especially apt venue, steeped in the tradition of Francesco Borromini and Gianlorenzo Bernini. Yet, just as we should rightly cavil at speaking of the Salzburg of the 17th or 18th centuries as ‘Austrian’ – ‘German’ is closer to the mark, if still misleading – so should we be wary of straightforwardly ascribing ‘Italian’ status to the southern culture from which many of its treasures had sprung. 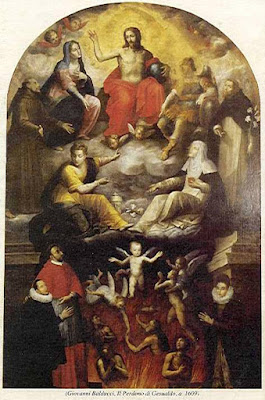 Stepping back another century, we might ask how meaningful it is to call Carlo Gesualdo an ‘Italian’ composer. It is perhaps inevitable that we should do so with hindsight. So long as we are clear that Renaissance Italy had little conception of nationhood comparable to our own, it will do no harm. Prince of Venosa and Count of Conza, Gesualdo came from the south, from the Kingdom of Naples, although he also spent time in Ferrara and Rome. By the time Gesualdo came to write his late Tenebrae Responsories, however, he was largely a recluse, confined to his estate in ‘melancholy’. It was Gesualdo’s uncle, Cardinal Carlo (St Charles) Borromeo, Archbishop of Milan, who had suggested in Gesualdo’s youth that sacred music might be written in a less conservative, more madrigalian fashion. Borromeo increasingly became an object of veneration for Gesualdo. A 1609 altarpiece commissioned from Giovanni Balducci for the Capuchin church on the Gesualdo estate, Santa Maria delle Grazie, brings together in sacra conversazione Borromeo (canonized the following year), Gesualdo, his second wife Leonora and their dead son’s purified soul. 1611 saw publication of his Tenebrae Responsories, written with private performance in mind beneath that image: Il perdono di Gesualdo.

There is something especially intimate to these 27 motets, from which we shall hear but four: intimate in their relative emotionalism, far more readily associated with single motets than with such collections. Counter-Reformation Italy heard many such settings of combined offices of Matins and Lauds for Maundy Thursday, Good Friday and Holy Saturday: the ‘triduum sacrum’, heard in the dark shadow, ‘in tenebris’, of their preceding evenings. Laden with grief, Gesualdo’s expression – anachronistically, ‘expressionism’ – is less exaggerated in these six-voice settings than in his more overtly experimental madrigals, yet perhaps more distilled, more integrated, such has often tended to be the way with music for the church. It is difficult, however, and perhaps impossible, even undesirable, to dissociate the travails of Gesualdo’s life and suffering entirely from their style and content. Suffering, betrayal, agony here seem both present and sublimated: a musical act of contrition to accompany, even to intensify, the scene in the altarpiece above.

Gesualdo Beyond the Grave

Varieties of Gesualdo’s notoriety, be it autobiographical or musical, have by now been rendered more or less indistinguishable. Aristocratic licence – Gesualdo had no need of a patron – helps provide some connection for the composer perhaps still known best for having murdered his first wife and her lover in flagrante. We should probably concede that, whether we like it or not, our Gesualdo, as man, composer, or both, is in many ways a different figure from the Gesualdo of his own time. There is nothing wrong with that; we might speak similarly of any artist of the past, from Machaut to Webern and beyond. At any rate, the Gesualdo of scandals personal and artistic has inspired many composers since his 20th-century rediscovery: among them, Peter Warlock, Igor Stravinsky, Peter Maxwell Davies, Alfred Schnittke, Salvatore Sciarrino, Georg Friedrich Haas and Hilda Parades. Rihm’s Seven Passion Texts (2001–6, later published with instrumental interludes as Vigilia) takes its place in this tradition: knowing, intentional response to Gesualdo’s responsories, likewise for six voices.

Rihm described himself in 2006 as ‘one who does not pray, but speaks with God’, and has turned to setting sacred texts increasingly since the Millennium. He also, not uncommonly among artists, had childhood dreams of the priesthood. Composer Peter Bannister has enlighteningly compared Rihm to the Italian philosopher Gianni Vattimo, a writer with strong Marxist and Roman Catholic strands to his thinking. Bannister asks whether Rihm’s ‘harmonic idiom in these pieces’ may be heard analogously ‘to Vattimo’s “weak thought”’, the thought of a ‘self-confessed “half-believer”’, in that ‘his language suggests directionality and simultaneously subverts it at every stage, hinting at “strong structures” but scrupulously avoiding them’. There is certainly reference as well as affinity to be found in these motets to the glories of polyphony. As often with Rihm, there are tonal affinities too, sometimes more oblique than others. Even at their strongest, though, as perhaps in ‘Tristis est anima mea’, one would never mistake them for the once-fashionable ‘spirituality’ of so-called ‘holy minimalism’.

This is not the fervent belief of a Messiaen, perhaps not belief at all, but it is of a piece with Rihm’s ongoing fascination with music and practices of the past. To quote Edward Campbell, Rihm has ‘no compunction in juxtaposing music […] flagrantly modernist in aesthetic alongside passages that cut deeply into the DNA of the German Romantic tradition’. Here, another tradition too, albeit seen and heard through a Romantic-modernist prism. For Rihm, moreover, the Holocaust inevitably casts a particular, as well as universal shadow, over tales and rites of suffering. In his Deus Passus, written for the 250th anniversary of Bach’s death in 2000, his new St Luke Passion came strikingly to an unfulfilled close with Paul Celan’s poem Tenebrae. That may surely be felt here in a chromaticism unfulfilled because it cannot be.

Music of Resistance and Liberation

Rihm has freely acknowledged the importance of Luigi Nono for his music too, helping – as so often in the dialectic between German and Italian music – impart a clarity of line often welcome among the thickets of German post-expressionism. The kinship between Nono’s and Rihm’s Hölderlin fragments is clear to all, but Nono’s importance as ‘a model I cherish’ has clearly been broader, Rihm going so far as to call Nono ‘the prototypical artist, searching and failing, extremely secure and extremely insecure’, calling particular attention to the ‘ecstasy’ of Nono’s ‘sound language’.

A Venetian by birth, in 1924, and death, in 1990, Nono evinced considerable interest in early ‘Italian’, often Venetian, music; his final music drama, Prometeo, often conjuring up the impression of a marriage between Marx and Palestrina and other late polyphonists, Gesualdo included, mediated by Walter Benjamin and Nono’s librettist, Massimo Cacciari. For, as Nono’s friend and colleague Claudio Abbado attested, Nono ‘never lost the deep-rooted ties to the long tradition of Venetian music […] Gigi’s sense of an espressivo or cantabile line also stems from this tradition’. Nono’s studies at the Venice Conservatory with Gian Francesco Malipiero had encompassed study of earlier traditions. Sheer delight in vocal writing and the potential of the human voice, would inform Nono’s work throughout his life, nowhere more so than in the 1955–6 cantata Il canto sospeso. Nono would recall in 1973 that Malipiero had been:

A lovingly concerned master, as I learned when he took me as a pupil during the bestial rule of fascism (from 1943 to 1945) and in his courses and seminars opened the door to study and knowledge of music which at that time lay prohibited in Italy: Schoenberg, Webern, also Dallapiccola, and naturally Monteverdi and the music of the Italian Renaissance.

This setting of texts from European resistance fighters unites all such strands, Il canto sospeso being, again to quote Abbado, ‘music born of deep dismay, painful and accusing’. Every work, for Nono, required what he called ‘a human “provocation”: an event, an experience, a test in our lives, which provokes my instinct and my consciousness, as man and musician, to bear witness’. Each of the texts we hear offers testimony from a resistance fighter shortly to be killed by the Nazis. There is here a glowing post-Romanticism: painful, even agonizing, in its beauty, nowhere more so than in the sixth movement, when, after what we may think of as a choral Dies irae without end – remembrance of Esther Srul, a victim of Operation Barbarossa – orchestral music beguiles perhaps all too readily. Words, witness, their horror nonetheless continue to resist their aestheticization. The Webern-like tenor aria-with-ensemble in which we hear from Chaim, a 14-year-old Jew from Galicia, or the ravishing melismatic writing for soprano in particular, suggest promise that cannot, should not, be fulfilled. We await, wish for reconciliation, even benediction, but know, with Nono – as, with Rihm, perhaps even with Gesualdo – that it will not, cannot happen. For the ‘wedge’ quality to Nono’s 12-note row, intervals gradually broadening out – heard in linear fashion for the first time in the fourth movement – recalls certain Bach fugues, but also, tellingly here, Dallapiccola’s beacon of (false) hope in his anti-fascist opera Il prigioniero. We must hope, even if we have few grounds for doing so.

That said, words find themselves liberated from the tyranny of expectations. Broken down into constituent parts, as well as savoured melismatically, there is music to be experienced here that goes beyond the serial parameters of pitch, duration, timbre, dynamics, and so on. Nono’s point here was not, as his fellow avant-gardist Stockhausen believed, to divest the text of meaning; it was not ‘to withdraw it from the public eye where it has no place’. In his 1960 Darmstadt lecture, Text – Musik – Gesang, as transcribed by his pupil Helmut Lachenmann, Nono explicitly took issue with that very claim, having looked at Schubert, Monteverdi, Schoenberg, Bach, Gabrieli and others, proceeding to relish one particular an instance of Gesualdo’s madrigal word-setting – the word ‘splende’ in Il sol, qual or più splende – as a presentiment of his own: sounds verbal, phonetic, and musical created a ‘pluridimensional whole’, a counterpoint of sounds in musical declamation.

‘The final unity’ for Nono nonetheless remained in words rather than syllables or parts thereof. In a sense, it is the old controversy concerning polyphony and verbal comprehension, familiar to all students of Palestrina and the Council of Trent (or of Pfitzner’s opera Palestrina). Some controversies, quite rightly, never die, not least those in the endlessly fascinating relationships – however understood or misunderstood, however constructed or deconstructed – between German, Italian and countless other musics, between the art and thought of other times and our own.

(This essay was first published in a 2019 Salzburg Festival programme for a concert from the SWR Vokalensemble, SWR SO, Marcus Creed, and Peter Rundel.)
Posted by Mark Berry at 11:28 am