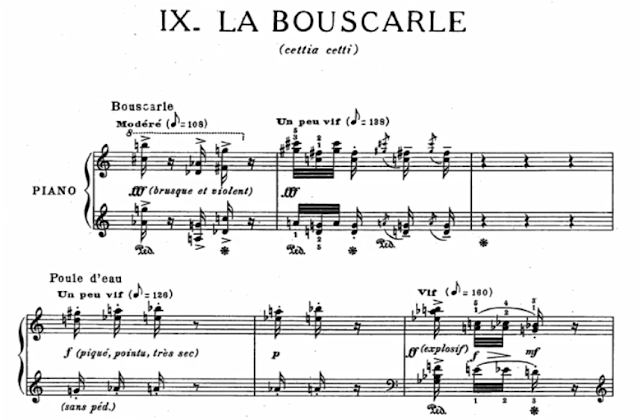 This is how a festival should open: world-class performance – a performance, I should wager, that has never been bettered – of a monument of the piano literature, more often spoken of than heard, at least in its entirety. Who better to perform Messiaen’s Catalogue d’oiseaux than Pierre-Laurent Aimard? As previously implied, no one. If ever there were royal lineage, it must be his: a direct link both to Messiaen and to Boulez, at one of whose Domaine musical concerts in 1959 Yvonne Loriod gave the premiere of this one collection, seven books, thirteen pieces, each of the latter bearing the name of a bird but that name providing the gateway to a French province. ‘Chaque pièce,’ in Messiaen’s words, wrote, ‘est écrite en l'honneur d'une province française. Elle porte en titre le nom de l'oiseau-type de la région choisie. Il n'est pas seul: ses voisins d'habitat l'entourent et chantent aussi … – son paysage, les heures du jour et de la nuit qui changent ce paysage, sont également présents, avec leurs couleurs, leur températures, la magie de leurs parfums.’ And so it was in practice: no need to concentrate on lineage, for this was a performance for the here and now, in which those regions, landscapes, times of day and night, colours, temperatures, and perfumes presented themselves within this ‘catalogue’, surely as theological as natural-historical. As ever in Messiaen as in Christianity worthy of the name, the systematic and the mystical go hand in hand. In truth, as in any performance, different listeners would take different things from it. It is difficult, however, to imagine anyone doubting its commitment, distinction, and enlightenment.

Aimard performed the work in three sections: Books I-III, Book IV (with just a single piece, no.7, ‘La Rousserolle effarvatte’), and Books V-VII, highlighting the symmetry of the whole (not so exact as some might claim, but what is?) and the special quality of that reed warbler and its companions’ journey from midnight through an entire day’s cycle and on to the following day’s three o’clock in the morning. One thing that struck me most strongly of all during that summit of the recital was the different character of sound Aimard elicited from different registers of his piano: almost organ-like (apt for Messiaen!) but also, somehow, reminiscent of the capabilities of earlier pianos, without loss of the advantages of the modern instrument. Quite how he accomplished that remained obscure, at least to me: pedals helped, touch too of course, but beyond that…? Likewise the different colours one heard within single chords, even within rests and fermatas, in some respects the most dramatically pregnant sections of whole. Another mystery. Strikingly Boulezian grand gestures to the middle of the night assisted with the sense of ‘parfum’, ‘couleur’, ‘températures’, and much else. A liturgical sense of time’s passing, as well as play with time, both in work and performance, proved as fascinating as anything of that ilk in Wagner.

There, as elsewhere, the character of different varieties of material but also the confrontation between them seemed to be at the heart of the drama that unfolded. The very opening of the first piece, ‘Le Chocard des Alpes’, was declamatory, even implacable, chords (literally colours, to a synaesthete such as Messiaen) confronting each other in unmistakeably 1950s-fashion, not unlike Aimard’s extraordinary way with Bach’s Art of Fugue, which I should probably try to hear again. The host of birds, their songs, those songs’ implications and connections, even in that first piece, set up patterns of contrast and sequence, of comparison and surprise, that would never be replicated, but certainly built upon. One passage there even suggested Jacob’s Ladder to me, as if the birds – humans too – were making their way to the celestial city itself. If so, it were a thoroughly constructed city, no mere mirage, Rameau as significant a predecessor as Debussy (well, not far off, anyway). There were certainly Debussyan castle ramparts to be discerned, not a million miles from Allemonde, later in that first book, alongside Mussorgskian sounds that would surely have enchanted and inspired both composers. Indeed, time and again, I heard Boris Godunov in downward-shifting harmonies – and their wordless dramatic import – in ‘L’Alouette lulu’, prior to the first interval.

In revelation of relationships between pitch and duration, work and performance alike inevitably recalled some of Messiaen’s pupils: not only Boulez, but perhaps more intriguingly, Stockhausen too. It is surely no coincidence that Aimard has recently been performing the latter’s Klavierstücke across Europe. (I heard him do so twice, in Berlin and in London.) Resonance, harmony, rhythm, everything came together in a totality that was yet quite different from that of those Messiaen instructed. Repeated chords in ‘L’Alouette calandrelle’, for instance, told as much as any in Stockhausen. There was still starker simplicity too, in the way a final phrase in more than one of the pieces could float like plainsong: complete and yet also implicitly bidding and referring to more, to something beyond. We heard, felt, were vouchsafed divine magnificence as well as avian ecstasy. How, moreover, a captivating diminuendo to the close could hypnotise, as seductively, humanly ‘poetic’ as anything in the repertoire. Ultimately, mystery was renewed, its boundaries dissolved even as work and performances revealed its workings.