What a sad waste of an evidently considerable budget. A rare opportunity, my first, to see an important opera staged; a fine cast, both in vocal and acting terms; equally fine orchestral playing and far from negligible conductor; all undone, alas, by one of the most uncomprehending, unmusical, wasteful, inept stagings of an opera I have had the misfortune to see in quite some time. To render the story of Medea, in any of its versions, so mind-numbingly banal would have been achievement in itself; to rob that rendition of any internal, let alone other, coherence, would have been one of equal magnitude; to exhibit such a deaf ear to Cherubini’s score for Médée, whilst arrogantly, ignorantly disdaining the claims of its genre…

Underlying director, Simon Stone’s premise, if we may call it that, is the patronising claim that, to be ‘relatable’, Médée must be brought down to size. That would appear to entail robbing her of all particularity, of anything that makes her remarkable, debasing her character into at least two more-or-less-incompatible clichés: not at all misogynistic, then. We start, ominously in all the wrong ways, with a film accompanying – actually, intentionally or otherwise, distracting from – the Overture. Médée and Jason are shown in this film to be a couple of unsympathetic, narcissistic rich people, with typically pretty accessory-children. (At least I think that was the claim.) Living somewhere in the Alpine region outside Salzburg - various film scenes take place round and about the festival city, though nothing, so far as I could tell, onstage itself – they enjoy a sickening ‘family’ breakfast and go to a concert. (If only I were making this up.) Jason cannot make it, so Médée and the children go without him, only to realise that they have forgotten something – if only I had – and turn back. Médée finds Jason in bed with Dircé, and they conclude a ‘high-net-worth divorce’. Just what Cherubini is suggesting in the score – and, for most of us, far less relatable than Euripides, Cherubini, or anyone in between.

And so it ineptly staggers on. The next time we see her, the formerly well-to-do Austrian (or at least Austrian-domiciled) Médée has been expelled to Georgia. Her settlement had run out, we learn via voicemail (!) She communicates via an Internet café with Créon and Jason: more, it seems, to incorporate two expensive sets onstage at the same time than out of any dramatic imperative. For some reason, she does not use Skype, although refers to it, moving away from the computer terminal to a payphone at the café. Créon and Jason, meanwhile, are at a lapdancing club, replete with acts more tiresome than erotic. The ‘girls’ seem also to be at the same venue, a rare and puzzling concession to cost, though they have some male strippers on hand.

Immigration control looms large, though hardly relevant. Yes, all of us to the left of ‘conservative’ directors such as Alvis Hermanis – he might even have made a better job of directing this – revile what is being done in our name to migrants. But to attempt to disarm criticism by portraying Médée in this way is at best bizarre. There are other ways to dispense with magic, if you wish. Créon, who seems to be some sort of interior minister, appears at the airport – we learn, for some reason or seemingly none, again via voicemail, that Médée has flown in via Istanbul – personally to prevent Médée from entering. Quite why she had not been forbidden entry beforehand, having assaulted at least one immigration officer, is unclear in what purports to be a realistic, contemporary setting. Both participants conduct their struggle live on television, which is streamed to an expensive international hotel in which the wedding guests and wedding couple, somewhat bafflingly, are all staying. An economics programme, with stock exchange updates, provides light relief. Again, I wish I were making this up.

Stone dispenses with the dialogue. Fair enough, I suppose, though really I cannot see the need. (A common tendency may be seen in many tedious butcherings of Fidelio.) Instead, we hear absurdly ‘dramatic’ – ‘operatic’, almost in the pejorative sense – of the aforementioned voicemail messages from Médée to Jason, which often make nonsense of the acts seen onstage, let alone the acts we might have seen. References to Skype and so forth – the programme she seems unable actually to use – are both edifying and instructive. The creators of Gossip Girl would have done a much better job – in every conceivable respect. 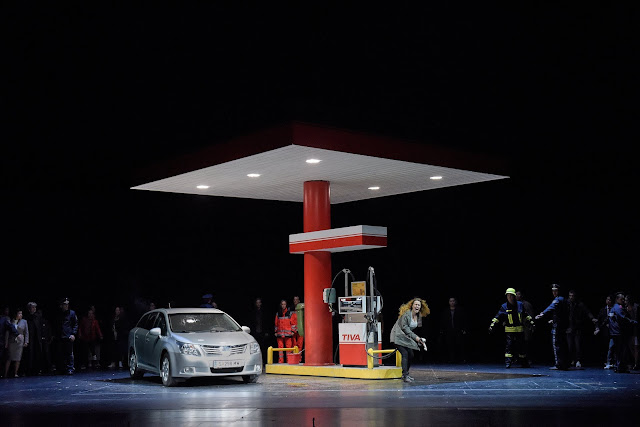 As for the third act’s dread deeds of vengeance, Stone manages to make a nonsense both of what the work is telling us and of his replacement, let alone the score. An equivalent to the poisoned robe and other gifts is set up, in expensive-looking shopping bags, but instead Médée decides to drug a waiter, dress up as him, and poison Dircé’s champagne. Even that does not seem to be the agent of her death, though, for then Médée, presumably because Stone thought the banal drama he had created needed a touch of melodrama, stabs Dircé and Créon, blood spilled all over. We revert to film, for riveting footage of Médée leaving the building, finding a car, and driving along a motorway, until we reach our modern-day temple: a motorway service station. There, after a lengthy period of time in which all the high state security surrounding her could simply have incapacitated her and saved the children, not then dead but just seated in the car, she kills them and herself with exhaust fumes. The chorus could be seen waiting in the wings from where I was seated, apparently before it should. Even the lighting was not coordinated. And quite how Médée was supposed to have heard an offstage Jason, I have no idea. Any old police drama would have accomplished this with greater efficacy. At any rate: The End.

Poor Cherubini, then. Admired by Brahms and Wagner – a dual endorsement that is far from the easiest to have pulled off – not to mention minor luminaries such as Beethoven, Mendelssohn, Schumann, and even the elderly Haydn, Médée is too often underrated, neglected, or just ignored. Its legacy to later opéra comique is clear, but so too is what that genre failed to take up, and may well have benefited from doing so; perhaps one might even say the same for much grand opéra. However much Berlioz may, amusingly, have fumed against Cherubini, he clearly learned a great deal, just as Cherubini, still more so, had from Gluck. (It is surely no coincidence that Riccardo Muti has shown himself such an unfashionable enthusiast for both.) The construction of scenes is often fascinating: a veritable missing chapter in so many accounts, more assumed than actual, of nineteenth-century musical history.

Thomas Hengelbrock seemed more at home with that than with how the scenes might actually fit together, deplorably pausing to encourage, rather than at least to discourage, applause between them. But at least he brought that medium-term formal understanding to the table, along with a far from negligible ear for detail, in which the excellent players of the Vienna Philharmonic, on something approaching top form, truly shone. The chorus likewise sang with unfailing commitment: everything in Gluckian and other musical terms the production was not. Elena Stikhina gave a memorable, even moving, insofar as she was permitted, performance in the treacherous title role. Her coloratura proved searingly dramatic, a reinstatement Gluck himself would surely have understood and appreciated; her range of vocal colours was equally impressive. Dircé, in Stone’s world just another ‘real woman’, albeit less spirited, was fortunate to encounter such fine singing from Rosa Feola, who did whatever she could in these most trying circumstances. If Pavel Černoch sometimes sounded strained at the top of his vocal range, he proved tireless in communicating his difficult mix of allure and cowardice: unfailingly well-acted. Jason is just the thankless role you would expect it to be. Vitalij Kowaljow’s stentorian Créon and Alisa Kolosova’s rich-toned Néris likewise deserved better.

For Stone could not have shown less of an ear for music if he had tried. Perhaps he did. At any rate, his alternative irrelevancies distracted in the very worst way, even from themselves. By all means, comment on, question, even, if you are really sure about it, hold to account the work, of which the score is a crucial part. A production need not be its obedient servant. But to work so uncomprehendingly against it, by default rather than design: that was never likely to end well.