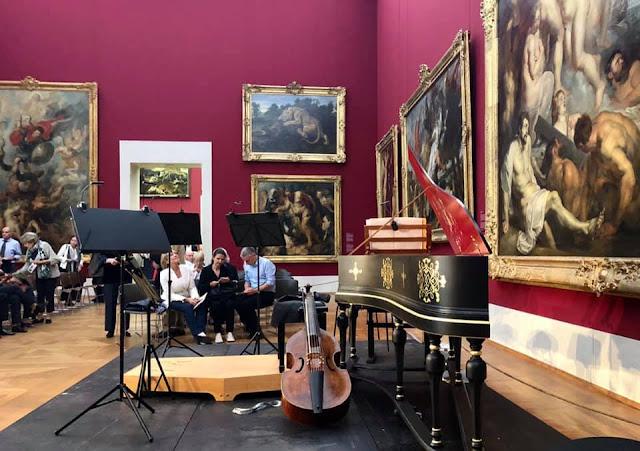 There could hardly be a more delightful venue for a concert of Baroque – or any –chamber music than one of the rooms of Munich’s Alte Pinakothek. Here, under the watchful eye(s) of Rubens’s Last Judgement, we heard from members of the Bavarian State Orchestra music by Bach, Telemann, and, from the previous generation, Johann Adam Reincken.

We started with Contrapunctus I and Contrapunctus II from the Art of Fugue: two violins, viola, and viola da gamba, no harpsichord. It was a ‘period’ sound, but not aggressively so, and mercifully not entirely without vibrato. More importantly, the music flowed, Barbara Burgdorf, Corinna Desch (violins), Christiane Arnold (viola), and Friederike Heumann (gamba) permitting Bach’s counterpoint to speak – and with it, his harmony. Dynamic contrasts were nicely variegated, and the two fugues were properly distinguished, the rhythmic lilt of the second’s subject informing its course, no mere add-on. You might say, ‘it would, wouldn’t it?’ but you might be sorely surprised. The music’s complexity grew, Schoenberg-like. All of us at heart know that Bach is the greatest of all. That need only be shown, not argued.

A modulatory harpsichord improvisation, the first of several from Dirk Börner, took us to A minor for Reincken’s Partita (as would be transcribed by Bach for keyboard, in his BWV 965). The musicians’ manner – minus viola – was now freer, which perhaps make sense in less complex music. There was certainly recognition that melody and harmony were very different. The different tempi of the first movement offered winning contrast, yet also sounded consequent. Burgdorf took her solo at quite a lick, without harrying it, Heumann hers with dignity and then, moving from ‘Adagio’ to ‘Allegro’, with a fine sense of release. A reflective ‘Allemand’ and related, yet distinct ‘Courant’ followed, the ensuing ‘Saraband’ perhaps somewhat hamstrung by ‘period’ manners. Still, the closing ‘Gigue’ made for a lively and highly musical conclusion, the musicians bringing form to life. This is not, by any stretch, great music, but it was interesting and worthwhile to hear.

Returning to Bach (XII a and b), the music sounded graver, deeper than still before. Then a further improvisatory passage led us southward, to Telemann in Italianate divertimento vein, here losing one of the violins. The ‘Introduzione’ seemed also to suggest a more Classical, or at least galant, voice, arguably bringing Bach’s distinctive qualities into greater relief (at least in retrospect). Each of the short movements was well characterised, without exaggeration. The ‘Largo’ was graceful, that grace founded on a delightful change of colour (gamba pizzicato): not unlike a brief number from an opera or ballet. The closing ‘Accelerando Allegro’ did what it suggested in equally delightful fashion. Even to this relative Telemann-sceptic, here were music and music-making that did not outstay their welcome.

Following an interval stroll among the visual Old Masters, we were well fortified for the ‘Stile francese’ from the Art of Fugue, its beating heart as German as ever, whatever the stylistic casing. We heard and felt both. If only the G major sonata for gamba and harpsichord, BWV 1027, had proceeded with such distinction. Heumann offered considerable grace, but Börner’s playing tended towards the unrelenting, even in the second movement, the sewing machine. The ‘Andante’ that followed sounded so effortful as often to lose its sense, although the finale offered a degree of vigour. Balance, moreover, proved a considerable problem, at least where I was seated, harpsichord often cruelly obscuring the gamba line. Even the ensuing Contrapunctus IX was hard-driven and scratchy, although the notes, for the most part, shone through.

Another of the by now all-too-predictable improvisations took us to the Trio Sonata for organ, BWV 527, here played by two violins and continuo. It can be done – but at least on this evidence, I should much rather hear it on the organ. At any rate, greater space to breathe would have been welcome, especially in the first movement. Desch’s playing on second violin proved more often than not the most pleasing, richer toned than that of her companions. Alas, Börner on harpsichord proved all too prosaic throughout. At least he was silent for Contrapunctus XI, which emerged, not coincidentally, with greater intimacy and gravity. Bach’s darkly expressive chromaticism worked its wonders in a performance of chiaroscuro that seemed at least to aspire to match the painterly examples surrounding it. A fugal gigue by Johann Gottlieb Goldberg made for a fine surprise as encore: as focused and as evidently relished as Telemann’s ‘Venerdi’. If Bach’s fortunes proved mixed in performance, he will always remain with us. This was a concert perhaps especially noteworthy for the opportunity it afforded to hear music from some of his contemporaries.